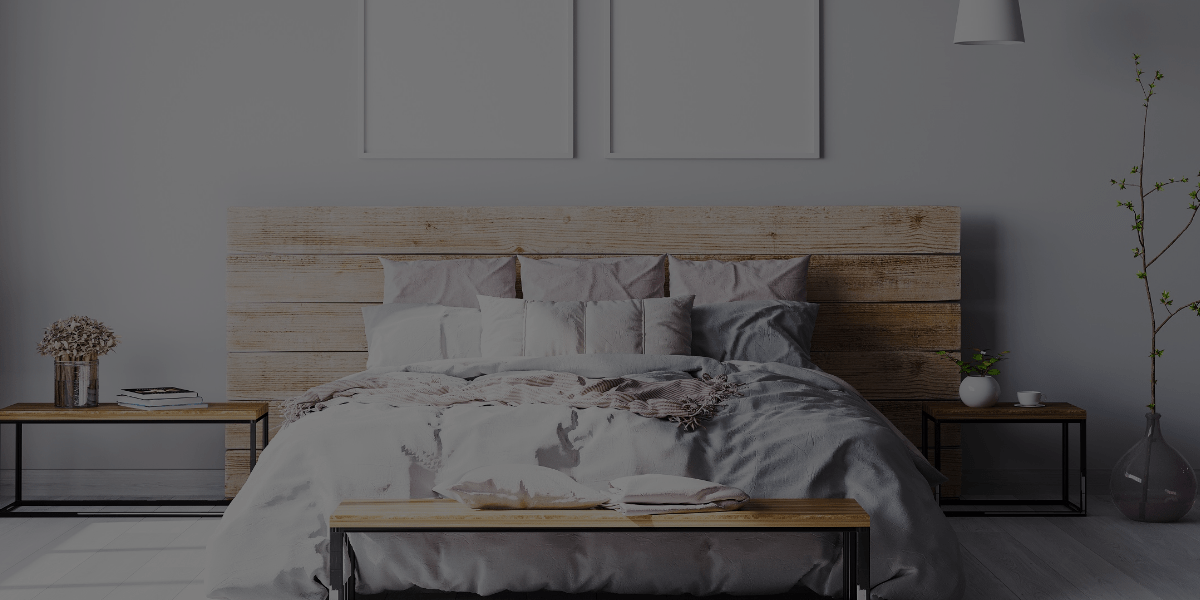 Tammy Hart, I.D.D.P, CAPS is a graduate and tutor of QC Design School, as well as a Certified Aging in Place Specialist from the National Association of Home Builders. She is the owner and award-winning designer for the Designer Chick Co., and the Past Director on the National Board for DDA (formerly CDECA).

Have you ever walked into a space and felt instantly calm, as if everything was effortlessly in place? On the other hand, have you ever been in a room that felt chaotic and uncomfortable, but couldn’t pin-point why?

What causes those feelings is the equal distribution of weight in a room. This is known as “balance”, and it’s one of the foundational principles of interior decorating and design. Balance is achieved in 3 ways: 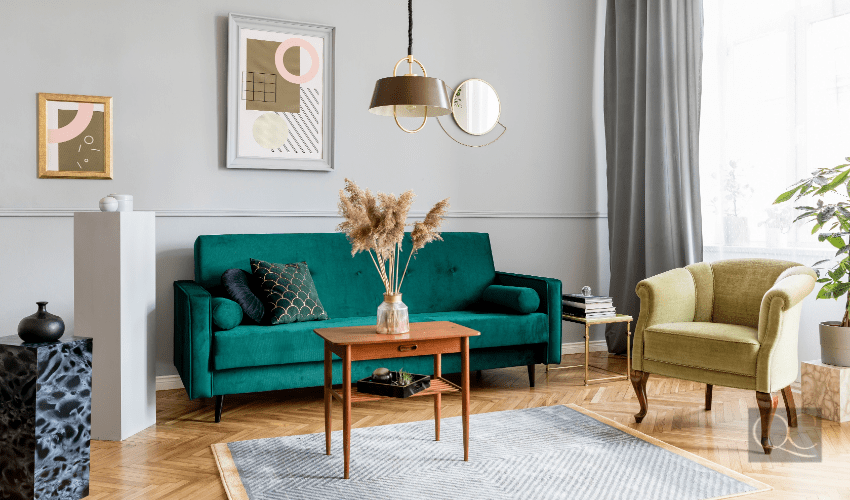 What is “Visual Weight”?

When we talk about weight, we’re not only referring to how much an object actually weighs. It’s also about how much our eye thinks it weighs. This is impacted by:

For example, imagine that you have two identical couches. One is in cream; the other, in brown. The cream couch will appear visually lighter, whereas the brown one will appear heavier. The same will happen if your change the textures of the material (i.e., leather versus microfiber).

Take the same couch and place block legs on it. On the other couch, place hairpin taller legs. You’ll find that the taller legs will appear visually lighter. When sitting closer to the ground, a couch can seem heavier than the one standing taller.

The style of the furniture and living space can also impact balance. For instance, imagine you have a couch of Scandinavian style with straight lines, versus a Traditional style one with rounder lines. The rounder lines will create a heavier weight. Seat depth will also impact the visual depth. The deeper the depth, the heavier the visual weight.

When creating balance in a space, taking visual weight into consideration is important in when determining the placement of objects, too. First and foremost, consider both the architectural features of the room and the focal point you are considering using. 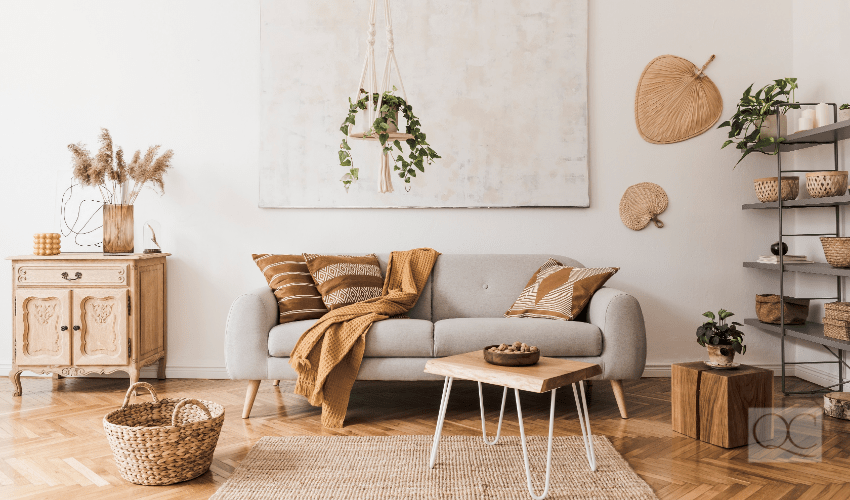 The 3 Ways to Achieve Balance

Symmetry is achieved by creating mirrored images. Symmetrical balance works bests in traditional, formal, farmhouse, and transitional spaces. You can take a room and draw a line down it or across it (these are the vertical and horizontal axes), to see the visual pairs.

The perfect equation of symmetrical balance is created by using visual pairs, and balancing objects with visual weight. Just keep in mind that too much symmetry in a space can cause the room to feel monotonous and predictable.

Asymmetry can be a bit challenging sometimes. It’s most commonly seen in modern, eclectic, and bohemian-styled spaces. If you’re attempting to create asymmetrical balance for the first time, it can feel a tad tricky, since it doesn’t use visual pairing of items.

Rather, it relies on pairing the elements of the room through visual weight. For instance, you may rely on common colors, or item sizes. Because we’re used to seeing symmetrical balance, asymmetrical balance will challenge your creativity and take you out of your comfort zone.

If done right, it can create a wow factor! It can often lead others to think, “I never thought of doing that; that’s awesome!” But if done wrong, the room will feel chaotic and unpleasant to be in. 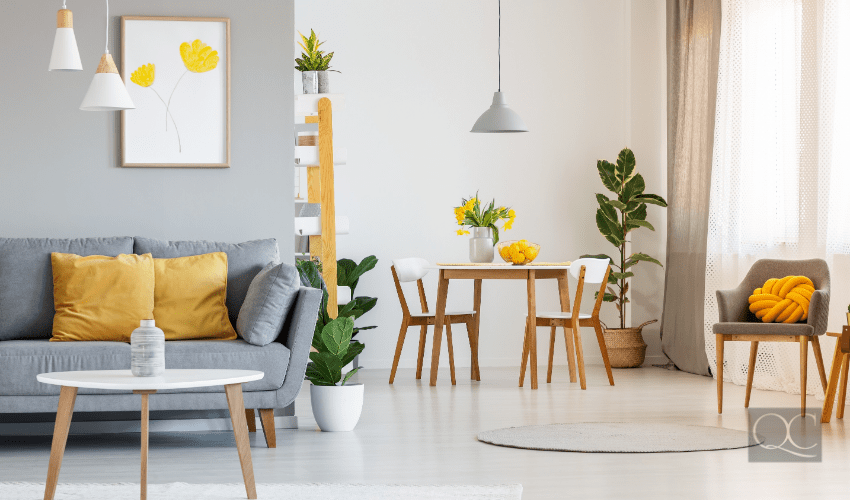 Radial balance isn’t necessarily related to a particular style. More so, it’s related to the spaces with circular centerpieces, where everything radiates out and around from the center focus of the space. The best example to use is to consider a circular dining table with a chandelier over top, and chairs working their way around and out from the table.

How to Become a Master of Balance

Understanding your client’s sense of style is always important. But when determining the type of balance you’ll use to design their space, it becomes essential. So, how can you properly understand what’s needed, and how to give your client what they want?

The best way to become a knowledgeable expert in any area of home design is to get training, and earn your interior decorator certification! Obtaining reputable training from an accredited design school is a guaranteed way to elevate your skill-set, give you an edge over the competition, and impress your clients!

QC Design School, for instance, offers an Interior Decorating Course that can provide you with an interior decorator certification in as little as 3-6 months! You’ll be instructed by a real-life professional designer, and in addition to learning the ins and outs of creating balance and visual weight, discover all the other key elements to successful home design!

Want to get TWO design courses for the price of one, as well as 4 months of DesignFiles for FREE? Until July 31st, enroll in QC’s leading online Interior Decorating Course, and pick a second course at NO additional charge!